skip to main | skip to sidebar

I got the cow! 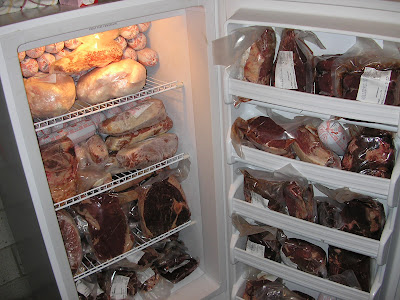 On Tuesday I went to , to visit Paul at the Plaid Piper Farm and pick up ~300 lbs of beef. Doug and Diana were kind enough to come along as well with their pickup truck. Di took some pictures of the farm while Doug, Paul and I set about loading up the truck. Paul threw in a carton of eggs for good measure, and off we went.

We got back to my townhouse and were immediately faced with a problem: my 14 cu. Ft. freezer wasn’t big enough to fit everything! After some packaging engineering, however, we were able to get all but two boxes worth of beef packed in.

There’s a of ground beef in there, probably upwards of 75lbs.

Di and Doug ended up taking home a box full of soup bones (thanks guys!) and I put the other box in the freezer on my fridge.

I had a T-bone steak for lunch and dinner, and it tasted great. The taste is actually difficult to describe; almost, well, grassy. It tasted much better than the beef I had ordered online, which had a strong fishy flavor.

Looking forward to another six months of beef!

Since blogger is annoying in how it handles images, I’m going to upload an Excel (2003) spreadsheet. Here’s a link:

I'm keeping a food log and notes in a written notebook, which for the sake of putting off an annoying task, I will scan and upload when I'm done rather than every month.

Month three was characterized by an increase in mood and energy. I began lifting heavy (at least for me) weights and continued throughout the month. I’ll start graphing those numbers next month – unfortunately, I managed to injure my shoulder playing football, so there’s a decent gap in my log. I also decided to restart the program with more emphasis on form, which reduced my total weight in the squat. I want to get a month’s worth of data with good form before I say anything there.

The blergh feeling is almost completely gone. I guess I’m finally keto-adapting. Overall, I’d rate October as a +3 or +4 relative to August.

I ordered a cow from a farm in Wykertown and pick it up November 11. That should be interesting, and hopefully end my trips to the store for several months.

How to use this blog

Start at the beginning (August 2009), with Introduction and Explanation. Most other entries fall into two categories: either a post where I attempt to answer a category of questions, or a data/analysis post titled "

pfw
I was diagnosed with Crohn's disease in 2003. I've spent the past five years ignoring the root of the problem: what I eat. Now I'm embarking on a series of self-experiments to measure the effects of different diets. This blog will serve as a public repository for the data I collect.